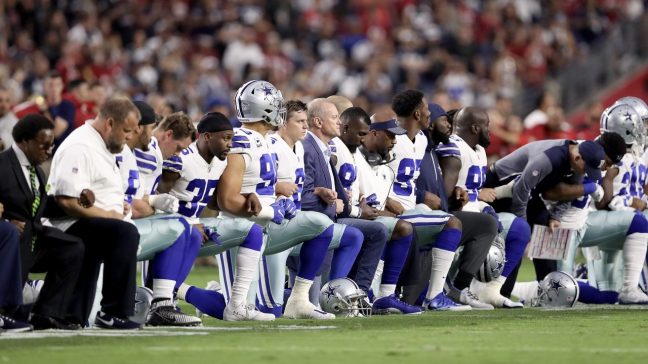 I’m a little bit afraid, even.

As you probably know, the news has been blowing up recently about the protest of the American Flag and the National Anthem that has been taking place in the NFL. I have personally watched several videos and read a couple articles from people on both sides of the issue, all of whom are trying to explain and make sense of the event.

Understandably, most of the feedback I’ve seen in relation to this has been negative.  Many people have pointed out that it is disgraceful and disrespectful to do what the players and coaches of the NFL have done. While I agree with that, let’s take a moment to see what the protest is actually about.

As stated in a CNN article, “kneeling during the National Anthem was never about the anthem itself. It wasn’t about the flag, or the military. It was about race, and all of the struggles that come with being a minority in America.”

Essentially, the protests began with minority members of the NFL, in protest of racial issues in America. As Colin Kaepernick stated, “I am not going to stand up to show pride in a flag for a country that oppresses black people and people of color.” People who support this protest will argue that the protest was not against America itself, and that it wasn’t an act of anti-patriotism.

Now, here’s my opinion, and mine alone: While this protest is wrong, the opinions and thoughts behind it are far more dangerous.

We are becoming more and more divided as a nation. There have always been differences between different groups of people in the US. That’s fine. Difference is what makes society such a wonderful thing. What’s NOT wonderful is the division. The fact that we have United States citizens who are unwilling to support the symbol of our freedom, and by so doing are pitting themselves against it.

Yes, that is what they are doing, and so is anyone else who shares this point of view. Why would I say that? Because they aren’t doing anything to further the progress of our nation. They are choosing not to support our flag, our anthem, our soldiers, and our nation. The very same nation which is the reason for their prosperity and their living. The reason they have a right to protest and fight against the nation is because of people who gave their lives for that very nation.

So stop dividing America. If you have a problem with how things are going, then do what you can to make a change. Go through the right channels. Peacefully protest without sacrificing your patriotism. Be a part of the country.  Help us as a people go further. Express your views in ways that don’t set you at odds with those that have sacrificed so much for our freedom.

Yeah, things need to change, but you don’t change someone’s opinion by antagonizing them. You change their opinion by being an example of the right way of doing things. You change opinions with friendship, understanding and tolerance. The very same things these protesters are seeking.

Basically, if members of EVERY GROUP of people would just quit being hypocrites and try to understand and support others, then none of these problems would exist.

Let’s stop being children, please. Let’s grow up and learn to work with each other. After all, a house divided cannot stand, and too many people have sacrificed too much to build this house to just let it fall.